Lunatics is a Netflix original comedy sketch show written by and starring Chris Lilley. This follows the six eccentric character who essentially march to the beat of their own drum. They all go against what society thinks of them and do whatever they want. At first, in my opinion, these characters are annoying. They are all outcast who are somewhat grating with their outlandishness and stupidity. But after the first few episodes, I found myself, really into the characters and excited about what will happen to them. On top of this, the characters are in fact caricatures of people who we will meet in the ‘real world.’ Once you release and except this, you can start to enjoy the sketches. Due to the short sketches, it makes the show a really easy watch but I found it worked best as almost ‘background noise’ when I need to do other things.

Firstly, the character in this show Becky, who is a seven foot three girl, played by Chris Lilly, who joins a university called butterflied in America with her sister Lucy. The story of her sketches is about her height and all sorts of problems it causes in university , from having to rearrange the beds in her dorm to accommodate her size, to have to put padding on ceiling fans to stop her being injured and the issues her flatmates have with her. This story deals with the bullying of Lucy by her flatmates and how she deals with it which is obviously an important issue especially for people whoa re going through something similar in school/college. In the beginning, I found this character frustrating due to her often times blind optimism but also spent a lot of time running off in tears which become very annoying (intentionally) after a while. Towards the end of this character’s story she sets up a YouTube channel making craft and it becomes very successful. But after she reveals to her viewers she is, in fact, seven foot she loses a lot of her viewers. This was done to empower people to be themselves but Becky lost followers and so people watching the show would have seen this as a bad thing. But eventually, her YouTube channel becomes successful again which suggests the decline was just a ploy to help build sympathy for her. This character is based on people going to university who think it’s going to be fun and easy. Her blind optimism is shared who loads of girls who are going through the same thing. These sketches were somewhat empowering to women and did give a happy ending so because if this I will give this sketch 3 out of 5 stars.

Next is the character Gavin who is a thirteen-year-old boy living in Australia. He spends a summer living in Shropshire, England with his aunt. Gavin is based on the image of a modern teenager. He takes selfies, has a YouTube channel, does stupid things without thinking of the consequences, swears a lot, etc. This is the sketch that has the most swearing but at times was uncomfortable to watch. Knowing that Chris, who plays Gavin, is forty-four years old pretending to be a child some of the language and actions are uncomfortable especially parts where he talks about “tunning” a girl who is a similar age as Gavin. But even with that in mind, this was the sketch I found the funniest as I know children who act exactly the same as Gavin. These sketches were very funny and the formation of “the fluffers” (his two friends from England) makes for very amusing scenes. These sketches are very entertaining and were probably the most enjoyable of the whole series. I would rate these sketches as 3 and a half stars out of 5. 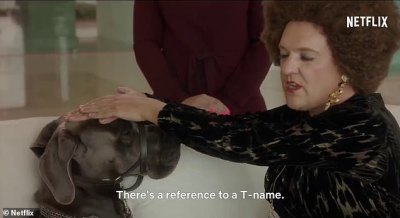 Next is Jana the pet physic. This character was so out there and such a ‘lunatic’ that it was just crazy to watch. She reads pets, who are playing up, minds to help their owners take better care of them. She is clearly a parody of traditional psychics. In one of the first scenes, she asks “something to do with a t name? p? z? j?” We all have an opinion of psychics and it seems that this sort of guess until you get it right method is popular among the circle. It’s not just her explanations that are off the wall but also her methods of communication with the pets. She allows pets to paint, she sings to them and even does ‘naked work’ to allow the pets to communicate. This character is so out there that it was really entertaining to watch, it was so far away from normal that it was a welcomed break from the other character. The issue for her character is that she develops feelings for her female assistant who is engaged to a man. Unrequited love is a very important topic to address and this sketch would not help at all. In fact, Jana relocates to South Africa and finds a new assistant when her old when heads back home to get married. This is exactly a great message for people who loves someone who doesn’t love them back but this is a show that should help with morality so that was great in my opinion. This character was entertaining and so wacky that it worked perfectly. I would rate these sketches as 3 out of 5 stars.

Next is the character Joyce who is an ex-model and porn star who moves into a home and becomes a hoarder. This character is paranoid that people are watching her and struggles to let go of things which is played on for laughs. I have to say that this character is my least favorite of the entire show as nothing really happened with her. Most of her sketches were about the things she has in her house. One of the only interesting things that happen to her is that her boyfriend, Les, who due to Joyce mental state the viewers assume he is fake, actually appears, in the end, to help Joyce relocate. I suppose this character was supposed to portray the effects that fame can have on people but this meant it was unrelatable for the everyday person. I did not enjoy these sketches much and so , i would have to rate it 2 out of 5 stars. 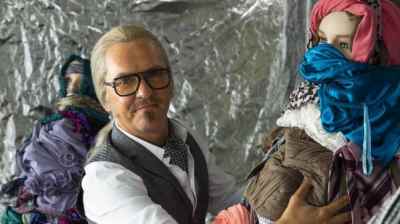 Next is the character Keith who starts of a head of fashion in a retail store. He and his wife, leave this store to start their own store. This character was interesting for two reasons. Firstly, it is really interesting to watch Keith work hard to set up his own business. The sketches show his struggle to open up a store, get customers, etc instead of opening and instantly being a hit. This is a real reflection of how setting up a business is like in real life and so this was fun to watch. Secondly, Keith is attracted to objects despite having a wife. He discusses his attraction to objects throughout the sketches and one of his more serious ‘relationships’ was with Karen the cash register. When Karen is brought back into the store it causes friction between Keith and his Wife leading to them splitting up and Keith marring Karen. The scene in which they get marries is complete nonsense but was very entertaining.  Also, Keith’s last name is Dick and so he names the shop MyDick which leads to many funny puns and jokes from himself and his employees. However, these sketches were nonsensical and so out there that it was hard to understand the character. His attraction to objects is very unusual and he appears to jump back and forth on his feeling with certain employees which was confusing to watch. I would give these sketches a 2 out of 5-star rating.

Finally, there is a character called Quentin who is an incompetent real estate agent with big dreams of how to make money. He has inherited his family business but quickly realizes he isn’t cut out to be the CEO. Quentin is similar to me in that he has big dreams and wants to do crazy things in his life. He tries to become an artist where he creates pieces of art and provides a commentary on modern art and its ludicrous value. After this idea falls apart he becomes a DJ and becomes somewhat successful during his first performance it all goes wrong and leads to a very hilarious scene in which sprays his ‘assistant’ with a fog cannon which was very entertaining to watch. I know someone who is very similar to Quentin which is exactly the point of this character. Also as a side note, Quentin and his family all have large bums. When this was revealed I thought it would end in a stupid story-line in which he learns to accept his own bum. Although this was a small part of the story it wasn’t the main story-line which was great to watch. This character was very funny and is an accurate caricature of people even I know. I would rate these sketches 3 out of 5 stars.

In general, the entire show is an easy-watch, entertaining show and with each sketch not being long you don’t become bored with each character. I  don’t think this is a show you can sit down and watch as you would game of thrones etc, but instead, it worked well as background noise. Most of them are an accurate representation of who they are supposed to be and there is a character to suit everyone. Overall I would give Lunatics 3 out of 5 stars.