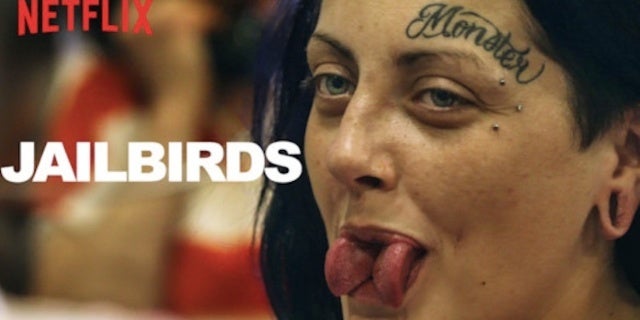 Jail Birds is a Netflix original series that portrays the grittier and more realistic view of life in a women’s prison. The Name of this series is very clever. The double connotations of the word “Bird” referring to females and as this is set in a female prison it is apt. Equally, it is an obvious allusion to the animal. Birds are often associated with being stuck in cages and so the residents of the prison are treated like birds. Trapped inside a cage without any sense of freedom. This title worked in concept but the name sounded too jovial and fun and as this series was a serious look into life in prison it may not be the best fit. This series, to me, was more of a documentary which explained how prison life is, how sentencing time works and how the prison community works together while locked up.
The series show life inside prison and the estranged community that is created. With the prison each person has their own jobs to do, there is a power structure that is naturally developed and their relationships/friendships that are formed between everyone. Even with the prison there is a weird concept of time , as there are no clocks or watches and the time of events are dictated to the inmates by the office on duty they obviously fall into a new sense of time and are encouraged to make the most of every second of their free time as they won’t know when they will get another chance. This was cleverly shown and portrayed to the viewers which educating for the audience and interesting from an outsider perspective. This made for really interesting TV as we could see the community is formed.
This series was incredibly real and raw as it involves real inmates who are going through the legal processes involved with crime. They are not characters who have been designed and created by a writer but instead, are the actual people and, while I understand there was probably some fabrication of events, this makes it a much more relatable show and made the characters easier to relate with. Instead of a fun and enjoyable prison experience (as shown in programs such as Orange is the new black) this series shows the true horrific environment of prison. Because of this, the entire show is rough and gritty with references to drug use, violence, and sexual activities. This means this is not a program you should watch with parents or young children as there is also a lot of swearing throughout. The really nice thing about this series was that as the people on screen were real people we saw an honest and true reflection of lesbians. This program aimed to create an honest portrayal of lesbians rather than a sexual objectification. This can only be of benefit for the LGBT community which is really great and empowerment of lesbians. Also as they used real people it allowed the prisoners to discuss their reasoning for committing their crimes which made for really interesting TV. This series did not just show the prisons but also the background staff that often times are not talked about. The staff talked about how they deal with conflicts, contraband, and sentencing which again was very educating and interesting to see. However, due to the realism of the series, there was very little character development, storyline and story arc which made the series difficult to watch. In conclusion, this series is an honest portrayal of prison conditions that was both educating and drama-filled but the lack of characters per se caused a disappointing lack of engagement and made the series difficult to watch. I would rate this production 2 out of 5 stars.